There is something now in the Bill for non-cohabiting fathers!

Amendments made to the Children and Family Relationships Bill will mean that a Birth Registrar will be empowered to witness a statutory declaration for joint guardianship, signed by the mother and father, appointing the father as a guardian. This can be done when the birth of the child is being registered (or re-registered) or within 14 days of the registration.  The Bill already includes automatic guardianship rights for unmarried fathers who have been cohabiting with the mother for 12 months  3 of which must be post birth. Read Press Release here. 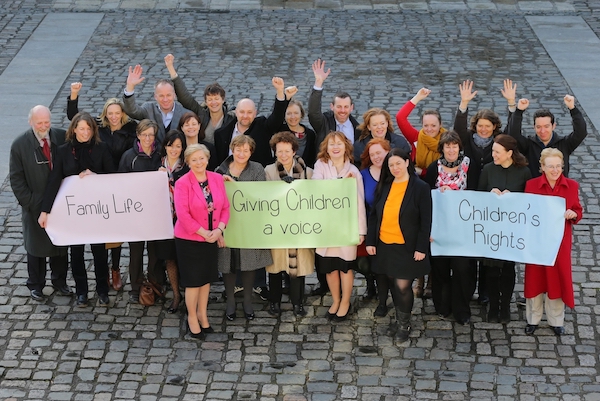 Treoir, together with Minister for Justice Frances Fitzgerald, members of the Children’s Rights Alliance and others, celebrated the publication of the Children and Family Relationships Bill 2015 at a seminar on the Bill in Dublin Castle on Monday 2nd February 2015.

“Treoir supports the enactment of this legislation but it is calling for some specific amendments to ensure that inequalities relating to unmarried fathers and their children are finally tackled” Margaret Dromey, CEO Treoir said.  Download Press Release

–  Listen to “A week in politics” discussion on the Children and Family Relationships Bill. Our Chair, Dr. Ruth Barrington, discusses the impact on unmarried dads.
(First item after the ads)

–  Listen to our CEO Margaret Dromey speaking about the Children and Family Relationships Heads of Bill 2014 and the impact it will have on unmarried families if implemented.  Margaret was interviewed by Dil Wickremasinghe of Newstalk.  Dr. Fergus Ryan, Family Law Lecturer, Maynooth and Colette Brown, columnist Irish Independent were also interviewed.

–  Treoir’s Submission for discussion at the Seanad – March 2015

– Article by Treoir’s Chair, Ruth Barrington – ‘Unmarried Fathers Should become
automatic guardians of their children under the Bill’