Click here - We will call you back
Update: March 2021 All children travelling abroad need their own passport.

Who is required to sign Passport Application Forms for children whose parents are not married to each other?

Who is a guardian?

If the parents are not married to each other: See Guardianship section on this website.

Travelling abroad with a child

It can be useful for a parent to carry a letter from the child’s other parent/guardian giving his/her consent to the child travelling abroad so that there is no misunderstanding.  This letter could be signed and witnessed by a commissioner for oaths.  This may be particularly relevant when you and your child have different surnames.  You could also check with the embassy of the country to which you intend travelling to find out if that country has any special requirements when travelling with a child.

A guardian of a child may make an application for a passport to be issued for a child living outside of the Republic of Ireland (where that child is entitled to an Irish passport). If a child has 2 guardians the consent of each guardian is required before a passport will be issued.  If a child has more than 2 guardians, the signatures of no more than two guardians are required before a passport will be issued. A passport may be issued without the consent of any other existing guardian/s if: *State refers to any State that has signed up to the Protection of Children (Hague Convention) 2000.

Who holds the passport?

A court may put in place conditions in relation to where the child’s passport is held.  The passport may be held by the court or by a named person and released under certain conditions if the court considers it to be in the best interests of the child.

How long does a passport last and what are the fees?

What documents are needed to get a passport?

Proof of citizenship may be required, and Application forms (APS1E) can be obtained at any Garda Station, Post Office, library and from the Passport Office in Dublin or Cork.

ADDITIONAL DOCUMENTS: If guardianship has been acquired through a statutory declaration, the following supporting documents must be submitted to the Passport Service along with the passport application. This applies to both first time applications and renewals: 1) The original statutory declaration 2) The child’s original birth certificate   Contact the Passport Office for further details or visit their website www.passport.ie 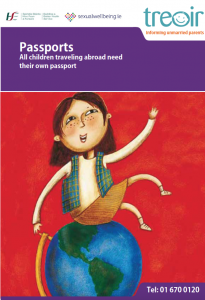 Treoir 2019 While every effort has been made to ensure the information provided in this webpage is accurate, no responsibility can be accepted by Treoir for any error or omission.
We use cookies on our website to give you the most relevant experience by remembering your preferences and repeat visits. By clicking “Accept”, you consent to the use of ALL the cookies. However you may visit Cookie Settings to provide a controlled consent.
Cookie settingsACCEPT
Privacy & Cookies Policy