Treoir is seeking a highly motivated and experienced individual to become its next CEO. The person will have the skills necessary to lead a small non-governmental organisation in a period of significant social change.

Congratulations
Congratulations to Dr. Geoffrey Shannon on his appointment as a District Court Judge.  Geoffrey has been a very good friend and supporter of Treoir for many years.  We wish him well in his new appointment.

We would also like to extend our congratulations to Senator Jillian van Turnhout on being appointed “politician of the year” by the Vincent Brown Show.  The judging panel stated that Senator van Turnhout was being recognised for ‘demonstrating how to bring advocacy issues forward and make a real impact.’ They notedthat ‘her focus on advocacy for children and principled issues have made real and significant changes.’ 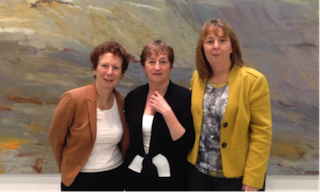 Treoir warmly welcomes the publication of the Report on the Pre-Legislative Scrutiny of the General Scheme and Heads of the Adoption (Information and Tracing) Bill 2015 by the Joint Committee on Health and Children.

Many of Treoir’s concerns are addressed in the report.  However, we are particularly disappointed that, in the context of wrongful registration, the Committee does not address the current situation whereby ‘inappropriate adoption/birth certificates’ are issued.

Our concern is about the inappropriateness of adoption/birth certificates being issued under section 89 (2) of the Adoption Act 2010.  The abridged version of the certificate, which appears to be the default version generally provided by the GRO, names the adoptive parents as the mother and father and there is no mention of adoption on the certificate.   There is something incongruous about the State on one hand issuing birth certificates with inaccurate information concealing the fact of adoption while at the same time censuring those who falsely registered births in the past to conceal the fact of adoption.

We understand that some adoptees would not wish the fact that they are adopted to appear on their ‘new birth certificate’.  A solution needs to be found to enable authentic certificates to be issued while respecting the wishes of these adoptees.   Consideration should be given to a return to short form birth certificates which shows details of the individual only and not of their parentage.

The Government has agreed to amend the Civil Registration Act 2004 to make it an absolute impediment to marriage that a party to the intended marriage is under 18, and to repeal section 33 of the Family Law Act 1995, thereby removing age as one of the criteria from which a party to a marriage can obtain an exemption.  It is expected that removing the underage exemption would have the additional benefit of helping to protect minors against forced marriage.

While the issue is often raised specifically in relation to girls, it also affects boys. According to CSO figures, 387 minors married at the age of 16 or 17 between 2004 and 2014.  In several cases, both parties to a marriage were minors. In total over the period, 302 girls and 85 boys married in the State at the age of 16 or 17.

(Press Release from the Department of Social Protection 15/12/2015)

Changes within the private rented sector
The Government has announced a package of measures relating to the Private Rented Sector which are designed to stabilise rents and boost supply.

Below are some of the changes effective as of December 2015:

The following are some of the changes that will occur following commencement of the relevant legislation contained in the Residential Tenancies (Amendment) Bill 2015:

The Housing Assistance Payment limits are being increased in Cork, Galway, Kildare and Meath where flexibility allows for a 20% payment above rent supplement thresholds. For families in emergency accommodation in Dublin City, HAP payments will be allowed for 50% above rent supplement levels.

There will also be a tax relief measure introduced in the Finance Act to allow landlords who lease to tenants in receipt of social housing supports such as rent supplement or the Housing Assistance Payment (HAP), to avail of 100% mortgage interest relief on their borrowings where they commit to accommodating tenants in receipt of the above payments for a minimum period of 3 years.

Family Mediation
The Waterford Institute of Technology Family Justice Mediation pilot project takes a different approach to mediation, according to Dr Róisín O’Shea, the project’s principal investigator.  It produces quick, short-term agreements between couples on issues including custody, access, guardianship and maintenance, out of which longer-term agreements can be reached within a specified time. The aim is to reduce long family law lists in the District Courts, and reduce stress and costs associated with family law proceedings.  A significant difference between the WIT pilot model and traditional family mediation is that two mediators, a male and female, are involved, so that there cannot be a claim of gender bias.

Initiated in October 2013, the project focussed initially in Kilkenny and Waterford and has four WIT volunteers and six mediators. Once the pilot has concluded it is hoped that family resource centres around the country will be able to offer the service.  It is run on a not-for-profit basis, self-financing and charges on a means-tested basis, with most clients paying €25 an hour.  Mediation is currently provided at the Newpark Close Family Resource Centre in Kilkenny.

Cúnamh Adoption Services
As of the 1st January 2016 Cúnamh will no longer be providing the following services i.e. pregnancy counselling, short term foster care or adoption. If you require these services please contact your nearest Tusla office or Here2Help. Cúnamh will continue to provide a post adoption and an information and tracing service.

FAMILY INCOME SUPPLEMENT (FIS)
The income thresholds for FIS will increase by €5 for each of the first two children from January 2016. The threshold for the third and subsequent children has not increased.

JOBSEEKER’S TRANSTIONAL PAYMENT
The means test for Jobseeker’s Transitional Payment will now be more aligned with the more generous means test for the One-Parent Family Payment. The earnings disregard for Jobseeker’s Transitional Payment will increase from €60 to €90 per week from January 2016 for existing and new recipients. All earnings above €90 will be assessed at 50% (currently assessed at 60%).

The Jobseeker’s Transitional Payment (JST) is a special arrangement under the Jobseeker’s Allowance  (JA) scheme that aims to support lone parents into the workforce while they have young children. The payment is available to people who are not cohabiting and whose youngest child is aged between 7 and 13 years. The main differences between JA and JST are:

When your youngest child reaches 14 years of age, the normal Jobseeker’s Allowance conditions will apply to you.

COMMUNITY EMPLOYMENT, JOB-BRIDGE
There will be an increase of €2.50 per week in top-up payments paid towards meals and travel costs for Community Employment (CE) and JobBridge participants from January 2016.

PATERNITY LEAVE/PATERNITY BENEFIT
Statutory Paternity Leave of 2 weeks will be introduced for births from September 2016 together with a new Paternity Benefit.

The new statutory paternity benefit will be paid at a rate of €230 per week, the same as maternity benefit, and will be based on the same PRSI contribution requirements.

UNIVERSAL SOCIAL CHARGE (USC)
The rates and thresholds of USC have changed.

The Early Childhood Care and Education (ECCE) Programme provides a free year of early childhood care and education for children of pre-school age. Currently children are entitled to participate in the ECCE Programme for up to 38 weeks. Children aged between 3 years 2 months and 4 years 7 months on 1st September of the relevant year are eligible to join the Programme. Registration for the Programme takes place in September.

From September 2016 the ECCE Programme will be extended to children aged between three years and five years and six months, or until they start primary school. The number of weeks available on the scheme is increased. Parents will be able to enroll their children in pre-school at three different points during the year- September, January and April.