The commencement of this Act will place a duty on unmarried parents to register the father’s name on the birth certificate of his child.

Why is it important to have a father's name on a child's birth cert?

If at all possible it is important to have the names of both parents on your child’s birth certificate.

Children need to know as much as possible about both their parents, so that they will have a good sense of their own identity and personal history. Having the father’s name on the child’s birth certificate helps to establish the child’s sense of identity as s/he grows up.

3 important things to remember
When should a birth be registered?

The birth of a child must be registered within 3 months of the birth.

Parents can choose from:

How can the father's name be registered?

There are different options for registering the father’s name where the mother and father are not married. The forms used are available from the Registrar’s Office.

a)    Both parents can register the birth together by going to the registrar in the hospital or local office (Form CRA 9).

c)    The father can complete a declaration form acknowledging that he is the father of the child (Form CRA 2) and bring it to the Registrar Office himself. He must also bring with him a declaration by the mother, correctly witnessed, naming him as the father (Form CRA 4).

d)    The mother or father may make a written request (Form CRA 5 and Form CRA 6 respectively) on production of a certified copy of a court order that names the person to be registered as the father (e.g. access, maintenance or guardianship). The parent making the request will be required to attend at the Office of the Registrar to sign the Register of Births.

Further information is available from:

If the child has been registered in the mother’s name alone, it is possible to re-register the birth at any future date in order to have the father’s details included, using any of the methods outlined above for registration.

Registering the birth of a donor-conceived child

Since the 4th May 2020, you can record the details of the parent(s), including the non- biological parent, when registering the birth of a donor-conceived child.

To complete registration, you will need:

Further information is available from the General Registrar’s Office at dahr@welfare.ie

How to re-register the birth of a donor-conceived child

From the 4th of May 2020, a DAHR birth can be re-registered to include the name of the second parent. A court order naming another person as the parent of the child is required prior to the re-registration.

To apply, download the form and attach a certified copy of the Court Order. Form available for download here.

You can email the completed form and Court Order to dahr@welfare.ie or post to DAHR Section, General Register Office.

Changing a child's surname in the Birth Register

It is possible to change the surname of a child if the parents marry following the birth of their child and where both parents agree. The names of both parents must be already entered in the Register of Births.

If the birth is being re-registered to add the father’s name and the original registration was after October 1997 the surname already chosen can be changed where both parents agree.

Other ways of changing a child's surname

The surname of a child can be changed by Deed Poll or by Common Usage but neither of these can change the entry in the Register of Births. The Deed Poll, which is the official process by which a person changes his / her name, is presented together with the birth certificate.

a) Changing a child’s surname by deed poll

It is important to note that where a parent wishes to change the surname of their child by Deed Poll it will be necessary to have the other parent sign a relevant form clearly indicating that they agree to the change. The reasons why the surname is changed must be outlined. In the case where a mother wishes to change the surname of the child and the father’s name does not appear on the Birth Certificate, a mother will have to sign a “supplemental affidavit” confirming that there are no court orders in force in relation to guardianship, access, custody or maintenance in relation to the child and outlining what role if any the father has in the child’s life.

Execution of a deed poll is a relatively simple process that involves declaring that the person has given up a former name and adopted a new name for all purposes. The deed must be printed on Deed Paper (which is available from legal stationers), signed in the former name and the new name and in the presence of a witness.

These documents can subsequently be used with the birth certificate and should be acceptable for most administrative procedures. If you would like to place the change of name on a publicly accessible record, it is possible to enroll the deed poll in the Central Office of the High Court.

If you are a non EU national, you will require the permission of the Minister for Justice & Equality under section 9 of the Aliens Act 1935 to change your name.

For further information, visit the Central Office of the High Court – Deed Poll section at http://www.courts.ie.

b) Changing a child’s surname by common usage

A person’s name can be changed by common usage – that is where a new name is adopted and it is “commonly used” by that person, for example on school reports, bank or post office accounts etc. It is posible to use this name for official purposes, e.g. passports, once you can show on two pieces of formal identification that this is the name you are using.

In order to proceed you must have a sworn statement from the father swearing he is the father and have either:

While every effort has been made to ensure the information provided in this webpage is accurate, no responsibility can be accepted by Treoir for any error or omission. 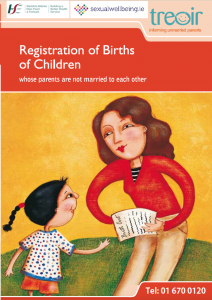 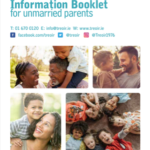