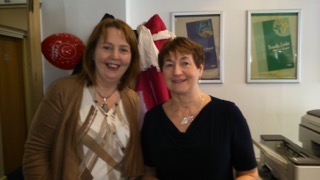 It was a bittersweet occasion in the Treoir office recently when we said goodbye to our CEO, Margaret Dromey, who is retiring after many years of sterling service to Treoir.  Margaret’s career in Treoir spanned almost 40 years, from the early days in the late 1970s when the stigma of unmarried parenthood was huge to the present when so much has been achieved to improve the status of unmarried families in Irish society.

In a tribute to Margaret the Chair, Dr. Ruth Barrington, referred to some of the significant milestones to which Treoir, with Margaret at the helm, contributed including:

Describing some of Margaret’s special qualities Ruth said she epitomised the values of Treoir: integrity, respect, empathy, professionalism, flexibility and inclusion.  She spoke of her sense of fairness, her passion and determination and her optimism, which was reflected in her positive outlook, her ‘can do’ attitude and her confidence in the future.

Warm tributes were paid to Margaret by former Chairwoman and honorary life member of Treoir, Gemma Rowley, by her loyal friend and former work colleague of many, many years, Margot Doherty and finally by Brenda Forde, a current long standing member of staff.

In the year that Treoir celebrates its fortieth anniversary, the year when we will be marking its many achievements and when we hope to show how ‘Treoir made a difference’, there is no doubt that Margaret Dromey made an enormous difference to the lives of unmarried parents and she leaves behind a legacy of which she can be justly proud.

We are delighted to announce the appointment of Mr. Greg Straton as the new CEO of Treoir. Greg joins us from the Spiritan Asylum Services Initiative (SPIRASI ) where he worked for 12 years, 5 as Executive Director.  During that time Greg was a member of the state appointed Working Group to advise on Improvements to the International Protection Process, including Direct Provision.  He has a proven track record in advancing human rights and social justice.

Greg brings a wealth of experience and expertise to the post and is very well equipped to advance the mission of Treoir, to meet the challenges ahead and to avail of opportunities to benefit the organisation.

The council and staff of Treoir extend a very warm welcome to Greg.

Certain sections of The Children and Family Relationships Act 2015 were commenced on 18th January 2016.  This new legislation will directly affect many of our users.  All the relevant sections of our website have been updated The following are some of the changes that have been commenced:

Treoir is very disappointed that the section in the Act that gives authority to Birth Registrars to provide and witness Statutory Declartion Forms for Joint Guardianship (S.I. No. 5 1998) has not yet commenced.  Treoir was very effective in influencing the inclusion of this piece of legislation in the Act.  When implemented, not only will unmarried parents be provided with this service but this will ensure that unmarried parents are informed about their legal status at the point of registering the birth of their child.  It is a commonly held belief that where a father has his name on his child’s birth certificate he has automatic legal rights in respect of his child.  This is not so.

Treoir campaigned strongly for the inclusion in the legislation of a Central Register of Guardianship Agreements (S.I. No. 5 of 1998).  Treoir considers it in the best interests of unmarried parents and their children to have these Declarations, which contain evidence of very significant legal rights and responsibilities in relation to children, recorded and was very concerned that it was not addressed in the legislation.  However, the Minister for Justice and Equality, Frances Fitzgerald TD in first introducing the legislation to Seanad Eireann said,  “some organisations have also raised the issue of a central register for statutory declarations. To that end, I have announced my intention to develop a pilot project to establish a voluntary repository into which non-marital parents can deposit copies of statutory declarations. The lessons from the pilot project will inform whether or not to proceed with the establishment of a national repository”.  Treoir is determined to ensure that this commitment is met and will continue to press for the initiation of the Central Register when a new government is in place.

Treoir’s information leaflets have been updated with the new legislation and are now available to download from our website (download above).  All Treoir publications can be ordered from info@treoir.ie.

â¨If you are unclear about any matter please contact an information officer on 01-6700120.

The Commission would also like to hear from people who have personal knowledge about the homes, for example, family members of residents, regular visitors or those who supplied services to the homes.  Written submissions are welcome and the Confidential Committee will also meet in person with a number of former residents, employees and others with relevant information to hear their experiences.

Treoir will make a submission in due course.

We would encourage those who have a story to tell or observations to make to contact the Commission, see www.mbhcoi.ie

Cura services
Cura which provides crisis or unplanned pregnancy support and counselling, is to close some of its centres, ie in Kilkenny, Tralee, Ennis, Thurles, Limerick, Athlone, and Wexford.   All services will be delivered through four main centres, in Dublin, Cork, Galway and Waterford and there will be outreach centres in the Louth-Monaghan area, Sligo and Tallaght.

Supported Accommodation Directory
The HSE Sexual health and Crisis Pregnancy Programme has updated the supported accommodation directory.  This is a directory for pregnant young women or lone mothers who may need temporary accommodation.
See here http://www.crisispregnancy.ie/publication/resources-for-service-providers/

Children First Act  –  an update!
While the Children First Act has been passed only section 28 which relates to corporal punishment has been commenced, as of the 11th December 2015.  The  result of this change in legislation means that a person who administers corporal punishment to a child will no longer be able to rely on the defence of ‘reasonable chastisement’ in the courts.  The other main provisions of the Act are yet to commence, such asâ¨-  Duties on mandated persons that are obliged under the Act to report Child  â¨   Protection and Welfare Concerns to TUSLAâ¨-  Establishing the ‘Inter-Departmental Implementation Group’â¨-  Developing child safeguarding statements

â¨The responsibilities and principles outlined in “Children First, National Guidance for the Protection and Welfare of Children” 2011 and any additional guidance issued by the Minister continues to apply in relation to the safeguarding of children.  These guidelines are currently being revised and updated to reflect the legislation.  This is to ensure that the Guidance will continue as a primary reference for all citizens to report concerns.

The full text of the Children First Act 2015 is avilable here and a background to the Act can be found at www.dcya.gov.ie.

The Department of Social Protection:  Interpretive and Translation Services

The Department’s Customer Charter and Action Plan 2013 – 2015 among other issues, sets out specific commitments relating to the provision of interpretive and translation services and the provision of information in alternative formats such as Braille or Audio. â¨â¨The following services are provided to customers where required:

For customers requiring any of the services outlined above, contact your nearest Intreo Centre, Local or Branch Office or the office dealing with your claim.